The Sydney Harbour Bridge, one of Australia’s most recognised, photographed and loved landmarks, will celebrate its 90th birthday on the 19th of March 2022 – the day it opened to the first cars (and horses) back in 1932.

Sydney Harbour Bridge was conceived in 1912 by John Bradfield, a civil engineer with the New South Wales Department of Public Works, who presented plans to Australia’s parliament for the construction of a bridge over Sydney Harbour, with options for either a suspension bridge or a cantilever bridge design. He envisioned the structure as part of an electric railway system for Sydney and its suburbs. The year after Bradfield submitted his plans, his cantilever design was accepted, and he was appointed to lead the project. Work on the bridge was delayed by World War I, however and it was not until 1922, with the passage of the Sydney Harbour Bridge Act, that funding for the project became available. By that time too, progress in steelmaking had made possible the construction of an arch bridge.

The building contract was awarded to the English enterprise Dorman Long & Co., which hired Sir Ralph Freeman to perform detailed design work. The final, approved plan called for a steel-arch bridge linking Dawes Point on the south with Milsons Point on the north. An arch bridge was chosen because it was less expensive than a cantilever design and capable of handling heavier loads. Construction began in 1924 under Bradfield’s supervision. The deep waters of Sydney Harbour made temporary supports impractical, so the steel arch was assembled by building out from each bank. The two sides met in the middle in 1930, and the bridge was officially opened with an elaborate ceremony on March 19, 1932.

Sydney will come alive with free music concerts, pop-up art galleries and a spectacular light show in celebration of the Sydney Harbour Bridge 90th anniversary on 19 March 2022.   The Bridge has been the centrepiece of Sydney’s New Year’s Eve celebrations, the backdrop for the walk for reconciliation and a much-loved symbol of Australia.

March 19 2022 is NSW’s chance to celebrate this vital and beautiful bridge from all angles.  There is currently a spectacular light show running for 4 nights and starts with a tribute to the Gadigal and Cammeraygal people with a carnival in the Sydney Streets over the weekend. 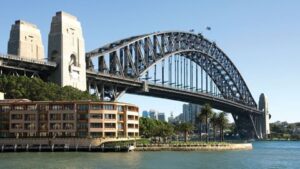 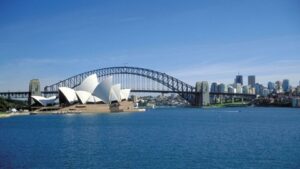 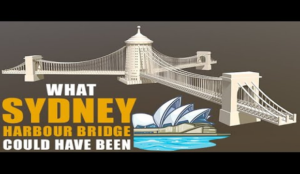 Sydney Harbour Bridge has formed the life and soul of Sydney as we know it.  In the ‘30s, it earned the nickname the “Iron Lung” because it supported the city’s economy and provided work through the Depression.  This structure is a great example of complex innovative engineering design and construction but also how engineering and infrastructure is the basis of societal and economic development.

Sydney Harbour Bridge in Port Jackson, New South Wales, Australia. Spanning 503 metres (1,650 feet), the structure is one of the longest steel-arch bridges in the world.

Despite Bradfield’s submission of proposals for the bridge design, Freeman considered himself to be the bridge’s true designer. The claim was supported by some authorities, though the controversy was never fully resolved.

The Editors of Encyclopaedia Britannica

By The Editors of Encyclopaedia Britannica • Edit History

John Bradfield, in full John Job Crew Bradfield, (born December 26, 1867, Sandgate, Queensland, Australia—died September 23, 1943, Gordon, New South Wales), Australian engineer known as “the father of modern Sydney.” Bradfield was known for his lead roles in the construction of the Sydney Harbour Bridge and the underground railway system, projects that greatly aided the growth of the city. The Sydney Harbour Bridge is among the city’s most-famous landmarks.

Bradfield attended the University of Sydney, where he earned a degree in mathematics in 1886. In 1889 he completed a bachelor’s degree in civil engineering at St. Andrew’s College (a residential college of the University of Sydney). He subsequently served as a draftsman for Queensland Railways and in 1891 joined the New South Wales Public Works Department. In 1895 Bradfield founded the Sydney University Engineering Society, for which he later served as president (1902–03 and 1919–20). The following year he finished a master’s degree in engineering at Sydney.

Bradfield served as an engineer on a number of projects, including those for the Cataract Dam, located near Sydney, and the Burrinjuck Dam on the Murrumbidgee River. In 1912 he submitted a proposal to Australia’s parliament for plans for a suspension bridge that would cross Sydney Harbour (Port Jackson). Later that year he also submitted a design for a cantilever bridge. The latter was accepted in 1913. That year he was named chief engineer for Sydney’s railways.

Following the acceptance of his original design, Bradfield began to consider a larger plan for improving transportation in Sydney, which would accommodate its growing population. In 1915 he proposed a grand plan for an underground electric railway system, though the project was postponed as a result of World War I. Meanwhile, in 1922 the Sydney Harbour Bridge Act was passed. The act allowed for either a cantilever or an arch design, the latter having become possible because of advances in steelmaking. Bradfield decided to pursue an arch design, and construction began in 1924. That same year Bradfield earned a doctorate of science in engineering from Sydney—the first such degree awarded by the university. In 1926 the first stations in Bradfield’s grand scheme—the new St. James and Museum railway stations—opened. From 1930 Bradfield supervised work on the Sydney Harbour Bridge, which finally opened in 1932.

Despite Bradfield’s submission of proposals for the bridge design, credit for the design has been a matter of dispute. Detailed design work for the bridge had been carried out by civil engineer Sir Ralph Freeman. Freeman considered himself to be the bridge’s true designer, a claim that was supported by some authorities. The controversy has never been fully resolved.

In 1933, retired from public service, Bradfield took on consulting and advisory work. Major projects in his later years included consulting engineer work (1934–40) for the cantilevered Story Bridge over the Brisbane River, advisory work for the Hornibrook Highway project near Brisbane, and planning and design work for the St. Lucia site of the University of Queensland.

This article was most recently revised and updated by Melissa Petruzzello.