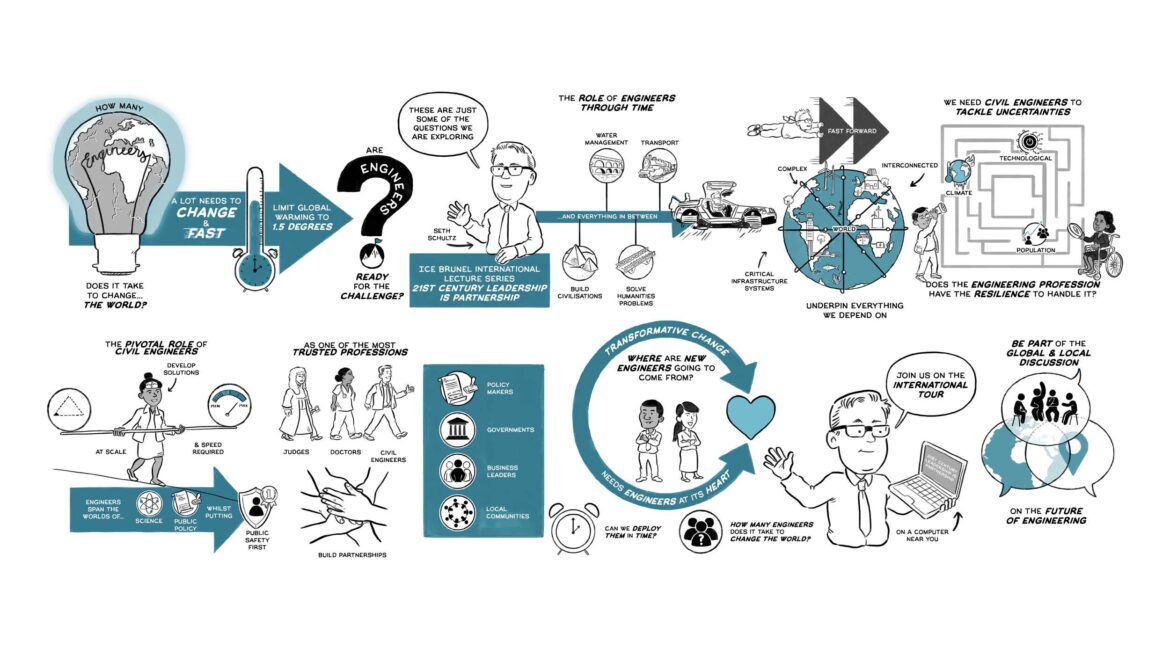 21st Century Leadership is Partnership: How a Coalition of the World’s Engineers Can Change the World

It was an absolute pleasure to introduce @Seth Schultz to present the Australia & New Zealand leg of the Brunel lecture series last week, if you missed it, here is the ICE’s recording.

This years Brunel lecture was titled “21st Century Leadership is Partnership: How a Coalition of the World’s Engineers Can Change the World”  Seth focussed on forming partnerships to address current and future global challenges.  He explored how the engineering community can deliver a carbon-neutral and resilient society by mid-century.  As infrastructure professionals we are in a position to influence this outcome by building the right infrastructure adapting better technologies and utilising sustainable materials and energy.

In Australia we are acutely aware the region is becoming hotter, and more prone to extreme heat, bushfires, droughts, floods and longer fire seasons because of climate change.  Since the beginning of the 20th century, the region has experienced an increase of nearly 1°C in average annual temperatures, with warming occurring at twice the rate since the 1950s.  Eight of Australia’s top ten warmest years on record have occurred since 2005.

Global warming poses serious pressure on human wellbeing, economic activity, community safety and the sustainability of natural ecosystems across the region.  Our Countries have unfortunately been major contributors to global warming.  The Climate Action Tracker, an independent scientific analysis that tracks government climate action and measures it against the globally agreed Paris Agreement, has rated both countries ‘highly insufficient’.

On a positive note, New Zealand is now one of the few countries to have net zero emissions targets set in law, its Zero Carbon Act.  New Zealand is at a turning point, as it will release an emissions reduction plan by December 2021. The country’s newly-established Climate Change Commission has reviewed the government’s climate policies, and published recommendations on a carbon budget.

Australia has committed to reducing its greenhouse gas emissions by 26-28% below 2005 levels, by 2030.  Scott Morrison has now agreed to attend the UN Climate Change Conference in Glasgow and last week’s Australia’s Federal government released Australia’s Long Term Emissions Reduction Plan, to deliver net zero emissions by 2050.  But is this enough????

While effective climate policy is evident in most states and mainland territories of Australia, the country is not on track to meet its current target, known as the Nationally Determined Contributions (NDCs).  Australia recommunicated its NDC in 2020, affirming Australia’s 2030 target, and an update is expected in 2025.

This is a travesty when you consider the wealth of natural resources which can be harnessed to produce power available in our country including solar, wind, water and hydro.  Australia has historically taken advantage of its natural coal reserves to fuel our economy and fuel China’s growth,  therefore shouldn’t we be working towards being a negative carbon society sooner than 2050?

An interesting question is where does nuclear sit in the Asia Pacific power mix? Nuclear offers solutions on all three fronts of the energy trilemma: security and reliability, affordability, and environmental sustainability  should we be promoting this as part of our energy mix?

The title of this year’s ICE Brunel series is “21st Century Leadership is Partnership: How a Coalition of the World’s Engineers Can Change the World” and it aims to discuss why civil engineers are ideally placed to make a significant difference to our future.  This year’s series focuses on forming partnerships to address current and future global challenges. It explores how the engineering community can deliver a carbon-neutral and resilient society by mid-century.

Rachel Skinner, ICE President, highlighted in her presidential address last November the need for civil engineers to act together, urgently, to help reduce carbon emissions and, therefore, address climate change.  Infrastructure is now responsible for around 70% of the world’s carbon dioxide emissions, either because of the processes that create it or because of the behaviours it enables.   This is the critical link between climate change and infrastructure.   Civil engineers understand the whole life-cycle of infrastructure and its associated systems, so we are ideally placed to change the way we build for the future.   To quote Rachel – “This year’s Brunel series is a significant step in the right direction and the perfect platform to debate that engineers must face future challenges now or risk being left behind”.

As a member of our Institutions Council I know that we have put decarbonisation and climate resilience at the heart of our agenda alongside productivity, digital and other key transformation strands.

This Brunel lecture ties in with this year’s ICE State of the Nation report, which I encourage you to read, where we define 6 ways for civil engineers to act on climate change:  In summary and simplistically they are:

This year’s lecture series considers what it is to be an engineer, and whether this meets the needs of a future workforce to deliver resilient and sustainable systems.

Our incoming President Ed McCann’s mandate is how we can thrive in the 21st century and he is talking about the infrastructure profession and our influence on society.  As President one area Ed is raising awareness in is about engineers EQ and how we raise society’s understanding of these challenges, provide and implement solutions.

This Brunel lecture series is an example of how our institution is raising this awareness and knowledge.  But ultimately, it’s up to us, as individuals and professionals to lead, to apply our technical understanding, to work with industry, our clients, investors and government to influence the right outcome for society today and for tomorrow.

We cannot kick the can down the road for tomorrows generation to pick up, it will be exponentially more difficult for them to fix.   We need to take responsibility for this global climate disaster now.

As a result of the discussion one key take away for me was how important it is we all start making big and little changes.

As a result of the Q&A I calculated my families carbon footprint and have offset our carbon footprint, so we are now carbon neutral family.  As a business we will be carbon neutral by next year and our entire team are currently reviewing their own personal carbon footprints.  This is a small step, but every marathon starts with putting one foot infront of the other…. it’s something that we can all do….